Working with Successful Endeavours not only gives you access to a set of technical capabilities, you also get a mindset that has created profit opportunities for our clients and consistently delivered successful projects.

Below are descriptions of our projects to assist in giving you a clearer understanding of our typical electronics and embedded software projects.

These are typically communication driven industrial IO modules, data loggers, sensors or user interfaces. The emphasis is usually on robust and reliable operation. These are executed using an 8 bit microcontroller such as one of the Atmel AVR range. We analyse the design to determine what to do in hardware, what to do in software, and how to best meet fastest time to market, highest performance or lowest system cost, whatever is the highest priority goal for a project.

Here are some examples:

All the above projects were executed using Atmel AVR microcontrollers with less than 16K FLASH. This is more a reflection of the efficiency of the design process than the simplicity of the task.

We designed a customised audio mixer for an Australian tertiary college air pilot training program. The college provides International English language training and assessment for air traffic controllers and pilots in a range of countries. Our client had been using a cheap mixing desk with separate leads, adapters and expensive aviation style headsets. We designed a customised desk which used standard PC electret headsets and managed all the signal routing and side tone modes from a minimum of controls. Mode control was a single switch and headphone and microphone volume was one knob per function. Sound quality was better than the existing solution and the total package cost less than the headsets they had previously been using. They are made in small batches and we also organised that. And last but not least, it is exclusive to the college and increases their prestige in the marketplace. 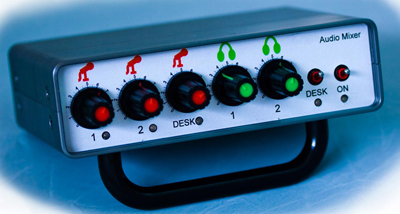 We designed the PC based valve controls for an Epidural Simulator and then the Air Ram based air/saline simulator for the syringe response mechanism that allowed simulation of the syringe for medical students and practitioners learning to perform epidural injections. During the development of the USB connectivity we proposed the idea and developed a set of equations to infer the external syringe position from a model of the internal system and knowledge of the current pressure and the current position of the internal cylinder. This allowed us to respond to pressure on the external syringe as if either air or saline was in the syringe. This overcame a huge drawback of simulators that used saline, which is that the saline ends up all over the instrument, students and the floor. Every aspect of the electrical and software control was executed by us including the BLDC position controller and the software system that managed it and processed the pressure and position models in real time.

We routinely develop modules for an international automotive parts supply company that designs and builds all the ECU hardware and software for the company's international market. A quick list of modules and areas of involvement is listed below: